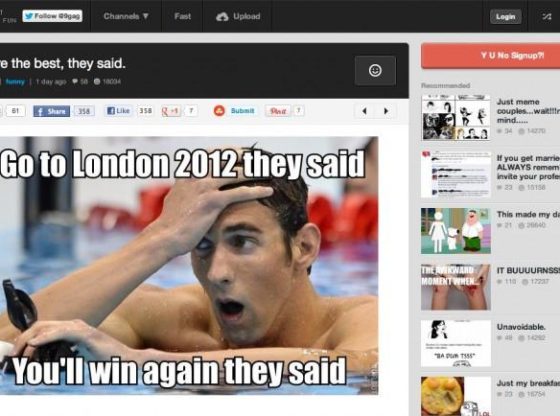 9GAG, the world’s largest and fastest growing online comedy community, today announced a new mobile app for its wildly popular irreverent and hilariously funny content. 9GAG’s new mobile app – named “9GAG” makes it even easier for people to quickly discover, express and share visual entertainment through photos and videos by delivering seamless access from nearly any mobile device, including both iOS and Android platforms. The only official mobile app from the creators of “9GAG” is available immediately from 9gag.com/mobile and through the Apple App Store.

The investment will be used to increase staffing, expand internationally and deliver continued platform enhancements in order to meet the explosive growth of the 9GAG community, which is taking online comedy to a new level. Since launching in 2008, 9GAG has grown to more than 70 million unique visitors and more than a billion page views per month, representing the highest global traffic of any humor website. In addition, 9GAG’s ability to allow users to easily post and spread entertainment content on Facebook and Twitter has further catapulted the reach of its content, with over five million monthly Facebook ‘shares’ and nearly one million Twitter followers.

“Humor is one of life’s greatest pleasures,” said Ray Chan, co-founder of 9GAG. “At 9GAG, we want to make it as easy as possible for people to have fun by sharing the things that make them laugh for the universal enjoyment of anyone on the web. With this funding, we will continue our journey, making it effortless to spread laughter throughout the world and enabling our entertaining visual content to be immediately accessed through innovative mobile apps.”

“9GAG embodies the entrepreneurial and edgy spirit that Freestyle Capital looks for in startups,” said Josh Felser, co-founder, Freestyle Capital. “Ray and his co-founders won’t stop until their content is viewed by everyone with a sense of humor, and they are well on their way. Freestyle is excited to join the 9GAG team and help them scale their already enormous digital media company even further.”

“In less than nine months, 9GAG has more than quadrupled the number of monthly unique visitors to its site, going from 16 million to more than 70 million,” said Tony Conrad, founding member and venture partner at True Ventures. “With its ability to easily and quickly spread entertaining visual content via Facebook and Twitter, the potential of 9GAG as a viral distribution platform is huge, and we look forward to working together with them to maximize this opportunity.”

Bringing More Fun to More People – Now Straight From Your Mobile Device
9GAG now delivers a streamlined version of its web-based platform that has been designed and enhanced for mobile devices, including fully zoomable, high resolution images and automatic download to support offline browsing, so users can save their 3G data. “9GAG” also integrates many of the company’s trademark features and is built on an open and collaborative framework that:

“9GAG” is available immediately for the Apple iOS platform and will be available for Android later this year. To get more information and download the app, visit 9gag.com/mobile.

With the number of mobile devices projected to exceed the world’s population by the end of 2012, 9GAG is dedicated to meet the needs of this surging market with mobile-optimized solutions that allow anyone in the world to get a laugh, enjoy some fun and share entertaining photos and videos straight from their mobile devices.

About 9GAG
Launched in 2008, 9GAG is the world’s largest and fastest growing online comedy community with more than 70 million unique visitors and more than a billion page views per month. 9GAG’s open and collaborative platform makes it easy for people to discover and share entertaining photos and videos to have fun and connect with others. 9GAG delivers the richest and most creative entertainment content possible by making it virtually effortless for users to post original or attributed material and easily share via social networks such as Facebook or Twitter. 9GAG generates millions of Facebook ‘shares’ and ‘likes’ each month and has nearly one million Twitter followers.