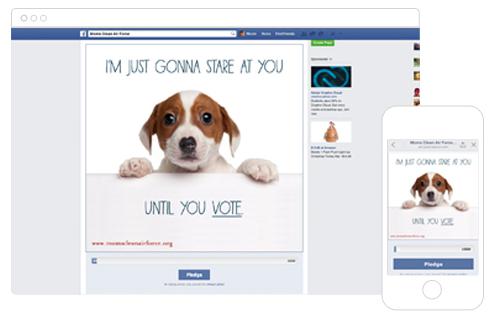 ActionSprout, the definitive source of tools and knowledge for nonprofits seeking to use Facebook to reach more people, cultivate relationships with existing supporters, and amplify fundraising efforts, announced it has closed $1.7 million in funding. Led by the Oregon Angel Fund, with participation from the Bellingham Angel Fund, Portland Seed Fund and other west coast investors, the financing will be used to further maximize the power of the ActionSprout application and to spread its use to more nonprofits looking to use social media to further their mission.
In related news, the company also announced that Chris Finley, co-founder and former Vice President, Business Development at SurveyMonkey, has joined the ActionSprout board of directors.
‘Some ninety percent of nonprofits use Facebook today with the goal of building support and deepening relationships with donors and volunteers. For the past two years our team has worked to develop tools and techniques to take the mystery out of how to make Facebook work for nonprofits, helping them achieve these very goals,’ said ActionSprout CEO, Drew Bernard. ‘As a result, this funding will be used to get our tools and know-how into the hands of more nonprofits. We are excited about our growing momentum and thrilled to have a group of mission-aligned investors helping us take the product and company to the next level.’
Said Chris Finley, ‘It’s a true honor to join the ActionSprout board of directors and help nonprofits accomplish their missions by bringing people to action through their social media efforts. As fellow travelers in the drive to further the success of nonprofit organizations, I look forward to working with the ActionSprout team to continue to get their tools into the hands of more organizations and continue to build tools that demystify Facebook for nonprofit social media managers.’
Comments on the news
‘Facebook is an ever-changing landscape and as a result, marketing here can be a real challenge for nonprofits,’ said Kivi Leroux Miller, president of Nonprofit Marketing Guide. ‘ActionSprout provides nonprofits the tools and knowledge they need to actively grow their supporter base, and more importantly, to consistently engage their fans in their good work with meaningful social actions. We are excited about the future expansion of the ActionSprout technology and training materials that the investment will bring, because it will help make Facebook an even more powerful tool for nonprofits.’
‘Social media campaigns designed to capture participant information drives them off of Facebook and most often end in a virtual dead-end,’ said John Haydon, nonprofit social media expert and author of Facebook Marketing For Dummies. ‘ActionSprout has effectively addressed this issue by providing meaningful actions that keep people within Facebook, and making it very easy to people to invite their friends to participate as well. ActionSprout provides two direct benefits: spreading reach and growing supporter participation.’
About the Oregon Angel Fund (OAF)
In addition to being Oregon’s top performing venture fund for many years running, OAF shares in ActionSprout’s social mission, with investment from the State of Oregon, Meyer Memorial Trust, and Oregon Community Fund. Founded in 2007, OAF is a community supported, professionally managed, investor driven angel fund backed by the leaders of Oregon’s business and technology community such as the Oregon Growth Board. OAF invests $7 million annually in the most promising startups and early-stage growth companies in Oregon and SW Washington. Over 1,400 jobs have been created by the 36 companies in the portfolio. For more information, please visit: www.OregonAngelFund.com
About ActionSprout
ActionSprout is currently used by thousands of nonprofits, both large and small, including Sierra Club, Unicef, and Greepeace. ActionSprout tools helps organizations reach and acquire email addresses from supporters, engage existing supporters beyond Likes, Comments, and Shares, and leverage the social network to amplify their off Facebook activities and fundraising efforts. From petition signing to donating, ActionSprout helps nonprofits grow fundraising efforts by reaching and engaging millions of supporters around mission related actions. ActionSprout can be found at www.actionsprout.com and www.facebook.com/ActionSprout.