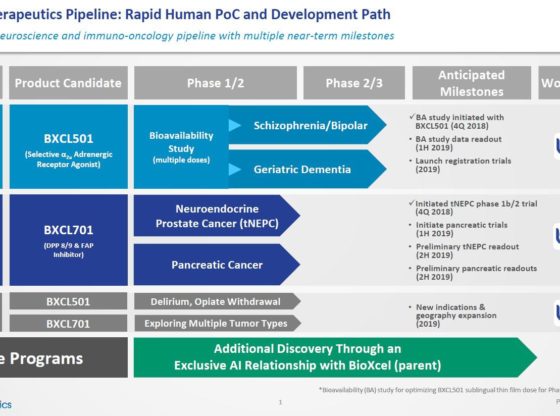 Avalon Ventures today announced the launch of three new companies formed through its ongoing successful collaboration with GSK to fund and launch up to 10 early-stage life science companies. This brings the total number of companies formed through the collaboration to six in just two years. Adrenergics, Inc., CadheRx Therapeutics, Inc., and Calporta Therapeutics, Inc., will each receive up to $10 million in a Series A financing and R&D support from Avalon Ventures and GSK. All three companies will be located at COI Pharmaceuticals in San Diego, the community of innovation established by Avalon Ventures to provide operational support, a fully equipped R&D facility and an experienced leadership team to its life science portfolio companies.

‘Avalon’s nimble start-up mentality aligned with the unparalleled R&D expertise and resources of a global pharmaceutical giant like GSK has proven to be a powerful engine for identifying exciting early-stage research for translation into drug candidates, producing six new biotech companies from this collaboration over the last two years,’ said Jay Lichter, Ph.D., managing director of Avalon Ventures.

‘These newly created companies bear the hallmarks of the type of projects we are looking for: novel targets with an established mechanism of action, a clear clinical path in a defined patient population and potential to expand into other indications.’

The collaboration between Avalon Ventures and GSK was established in April 2013 and will provide up to $495 million to fund a total of 10 new companies through preclinical proof of concept. Previously announced companies that have been launched through the collaboration include Sitari Pharmaceuticals, Inc., Silarus Therapeutics, Inc. and Thyritope Biosciences, Inc.

‘This collaboration underscores how large pharmaceutical companies and venture capitalists are working closely to leverage resources and expertise into a powerful vehicle that is bridging the gap between academia and entrepreneurship,’ said Lon Cardon, senior vice president, Alternative Discovery & Development at GSK. ‘Through our collaboration with Avalon Ventures, we are streamlining innovation at the earliest stages, creating the potential to increase the efficiency of drug discovery, which will ultimately benefit patients.’

Adrenergics is developing novel therapeutics to treat dilated cardiomyopathy (DCM) in patients that do not respond to existing therapies. Dilated cardiomyopathy is a disease of the muscle of the heart which usually starts in the left ventricle, the chamber of the heart responsible for pumping activity. Thinning of the left ventricle causes it to not pump blood effectively, resulting in inefficient blood supply throughout the body. While the condition may cause no noticeable symptoms, it can cause irregular heartbeat or blood clots and it may be life threatening. Existing DCM treatments, while beneficial for a number of patients, do not address a significant driver of disease progression that is present in a large proportion of DCM patients. Adrenergics is focusing on this key disease driver to develop medicines that are expected to modulate disease progression leading to improved outcomes in this difficult-to-treat patient population.

CadheRx is developing therapeutic antibodies targeting soluble E-cadherin (sEcad) for the treatment of solid tumors that are resistant to other treatments, particularly Cetuximab and Herceptin resistant epithelial cancers. sEcad levels are increased in many epithelial cancers and result in increased tumor cell proliferation, migration, invasion and angiogenesis. In vitro and in vivo studies have shown that antibodies targeting sEcad inhibit cell proliferation and promote cell death through apoptotic pathways in EGFR+/KRAS+ or BRAF+ Cetuximab resistant cell lines and tumors, as well as Her2+/Herceptin resistant cell lines and tumors. CadheRx was founded on intellectual property in-licensed from the laboratory of Sabine Brouxhon, M.D., Clinical Associate Professor, Department of Emergency Medicine in the School of Medicine at Stony Brook University.

Calporta is developing selective small molecule agonists of TRPML1 (transient receptor potential cation channel, mucolipin subfamily, member 1) for the treatment of Niemann-Pick C Disease (NPC) and other lysosomal storage diseases. Mutations that cause NPC lead to impaired intracellular lipid trafficking and lead to lysosomal accumulation of cholesterol and biolipds. TRPML1 is an ion channel in the lysosome and a key regulator of lysosomal trafficking processes. Impaired TRPML1 function has been implicated in multiple pathological conditions, including NPC. Agonists of TRPML1 restore calcium efflux and normalize lysosomal trafficking and function. In addition to NPC and other lysosomal storage diseases, agonists of TRPML1 may have broad potential in other diseases such as muscular dystrophy and various taopathies such as Alzheimer’s disease. Calporta’s approach is based on research from the lab of Haoxing Xu, Ph.D., at the University of Michigan.

Based on the terms of the Avalon-GSK collaboration, Avalon will provide Adrenergics, CadheRx and Calporta with executive leadership and operational management consistent with its current portfolio strategy. GSK has the option to acquire each of the companies upon the identification of a clinical candidate. Should GSK elect not to exercise this option on any of the companies, ownership of those companies will remain with Avalon, and Avalon will be free to enter into other strategic transactions.

About Avalon Ventures
Avalon Ventures is a venture capital firm that has founded and/or funded more than 100 information technology and life sciences companies. The firm is passionate about backing talented entrepreneurs seeking to build market-leading companies. Throughout the firm’s 30 year tenure, Avalon’s long-standing and successful focus has been on seed and early-stage companies. All Avalon partners are seasoned entrepreneurs with experience in company formation, operations and value creation in the life science and tech sectors. Avalon’s current fund of $200 million, launched in 2012, continues the firm’s tradition of pursuing disruptive ideas in ever changing markets.

Please note that this piece of work originally appeared in English at https://www.vcnewsdaily.com/Adrenergics/venture-funding.php. As Investocracy aims to bring global startup news and updates in both English and Japanese to you, it’s important that we attribute original source to you. If you have any questions/concerns please write to us at contact@investocracy.co