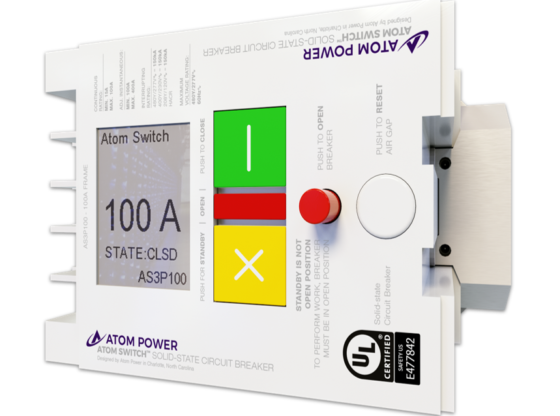 Atom Power, the inventor of the world’s first and only digital circuit breaker, announced today that it has raised $17. Series B funding of 75 million to build a future where power is connected, managed and used just like data on the Internet Series B investors include Valor Equity Partners, Rockwell Automation, Inc. , ABB Technology Ventures, Atreides Management Atom Power has raised a total of $23 million in funding, including the previous $3 million Series A in 2017.

Last year, the digital circuit breaker of Atom Power was the first of its kind to be listed by UL, bringing power distribution to the digital age for the first time. In contrast to traditional circuit breakers, the device intelligently manages the flow of power with software and semiconductors, connects unlimited power sources to one point, and dynamically switches between them on a need-based basis.

The latest funding will equip Atom Power to develop a next generation digital circuit breaker, scale its smart power management platform, and address the world’s most pressing power distribution challenges, such as integrating renewables into the grid, building more efficient data centers, and supporting other sustainable energy initiatives.

Looking ahead, Atom Power will use its advanced e-mobility technology to dramatically shift the way electric vehicle charging infrastructure is deployed through inherent demand management that saves energy and costs.

“Modern life is increasingly digital, yet the electrical infrastructure that powered our buildings has remained strongly analogous. This poses enormous challenges in promoting a smooth transition to electrification, renewable energy and electric vehicles,” said Ryan Kennedy, Chief Executive Officer of Atomic Power. “We need technology that gives us digital control of when and how we use power Last year, we made huge strides when we launched the first solid-state circuit breaker on the market, and we’re thrilled to continue building a future where energy is faster, safer and more reliable than ever before. “That’s right.

Please note that this piece of work originally appeared in English at https://www.vcnewsdaily.com/Atom%20Power/venture-funding.php. As Investocracy aims to bring global startup news and updates in both English and Japanese to you, it’s important that we attribute original source to you. If you have any questions/concerns please write to us at contact@investocracy.co