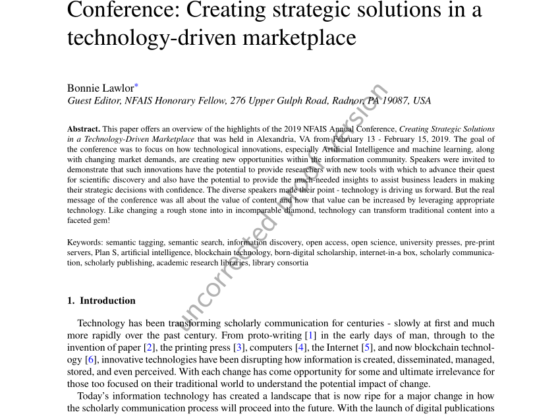 The funding was led by Lux Capital, a venture company that invests specifically in counter-conventional science & technology companies, along with the Knight Foundation, a non-profit foundation dedicated to supporting transformational ideas that foster informed and engaged communities. Earlier seed investors ff Venture Capital and New York Angels also took part in the round

Authoria Com is the leading collaboration platform for writing, sharing and discussing research-all in real-time. It was founded in 2013 by Dr. Alberto Pepe, an astrophysicist at Harvard, and Dr. Nathan Jenkins, a UC Berkeley physicist who met while working at CERN and was disappointed by the slow, inefficient and obsolete way in which research papers are written and disseminated.

Authorea is currently used by over 80,000 scholars across 70 countries in fields as diverse as physics, astronomy and computer science. The company offers users a collaborative online editing platform tailored to academic and technical writing-a word processor that makes adding quotes and equations and formatting references incredibly simple. Authorea is built on a Github-style model, and every document you create is a Git repository. This allows users to track document changes in a very granular way and easily integrate data into documents.

‘We are extremely excited to welcome Lux Capital and the Knight Foundation as new investors,’ said Authorea co-founder Dr. Pepe. Pepe ‘Both have a strong reputation and excellent track record in supporting transformational companies in science and technology. ”

‘All economic growth depends on new discoveries that depend on science,’ said Adam Goulburn, PhD, Partner at Lux Capital and Member of the Authorea Board of Directors. ‘Authorea looks at the science of science itself-how it is researched, reviewed, produced, and published. Whether tackling the reproducibility crisis or shortening the time from discovery to market, Authorea is an indispensable tool spanning the transition from the cosmos to cancer. ”

‘The future of science is based on powerful methods for collaborating on open and reproducible research-Authorea is leading the way to make this happen,’ said Sam Arbesman, PhD, Lux Residence Scientist. ‘What Github has done for software developers, Authorea is doing for scientists. Forget about statal research stuck in static journals, Authorea catalyzes real-time collaborations and sparks curiosity and creativity in the scientific method. Whether formulas, figures, comments, research results or references are powerfully handled-it is a game-changer and a competitive advantage for any scientist. ”

Authorea is growing rapidly in fields outside hard science, such as genomics, environmental science, and computational biology. For example, in June 2015, a dedicated global team of epidemiological researchers began an ambitious project to track the Ebola virus using large-scale genome sequences. Their groundbreaking research, written on Authorea, was published in the newspaper Cell and covered by the New York Times. The Authorea version of their article is the only place where readers can browse the history, workflows, and research data related to the study. Authorea is poised to shake up the stale academic publishing industry via an online platform that encourages data sharing and more open and transparent dissemination of research results, complete with all the data sources needed to reproduce them. Authorea plans to use the proceeds of this funding to encourage more open, data-driven research of this type.

Authorea is an online word processor that makes writing and publishing research faster and easier. With more than 80,000 members and a weekly growth rate that has doubled in the last nine months, Authorea is currently the fastest-growing science publishing platform in the world. For more information, visit www Authority Come on,

Lux Capital is a venture company based in New York City and Silicon Valley that invests in counter-conventional, seed and early-stage science and technology ventures. The firm manages $700 million in assets over four funds. See www for more information. Lux-capital Come on, Follow Lux on Twitter at @Lux_Capital

Please note that this piece of work originally appeared in English at https://www.vcnewsdaily.com/Authorea/venture-funding.php. As Investocracy aims to bring global startup news and updates in both English and Japanese to you, it’s important that we attribute original source to you. If you have any questions/concerns please write to us at contact@investocracy.co