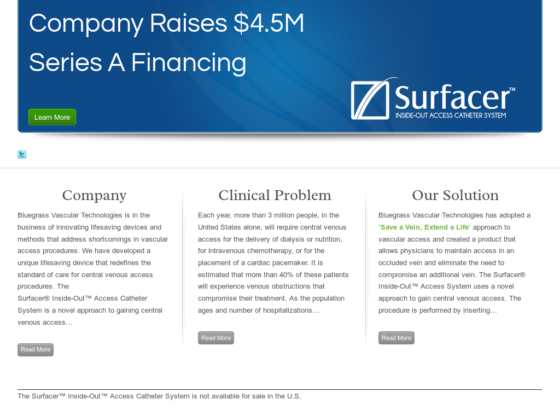 Bluegrass Vascular Technologies, a private medical technology company focused on innovative life-saving devices and vascular access methods, today announced the closing of $4. Series A funding of 5 million, led by Targeted Technology Fund II Proceeds from the agreement will allow Bluegrass Vascular to obtain CE mark for the Inside-Out Access Catheter System, improve manufacturing capabilities, and proceed with US regulatory submissions. The Surfacer System is a proprietary system that allows physicians to gain venous access through a novel ‘inside-out’ approach.

‘The Surfacer System addresses a significant unmet clinical need in the market for vascular access by enabling physicians to gain access through a previously occluded vein,’ said Alan Dean, Senior Managing Director of Targeted Technology Fund II, and Bluegrass Vascular Director. ‘With a growing market awareness of central venous occlusion and an interest in maintaining access, we believe that Bluegrass Vascular is well positioned to have a strong presence in the dialysis and chemotherapy markets and is a valued addition to our investment portfolio. ”

About 6 of them 5 million patients worldwide require central venous access (CVA) for medical treatment and it is estimated that more than 40% of these patients will develop venous thrombosis, which may compromise their medical care. After all central veins have been compromised, patients must resort to invasive surgical techniques to obtain or maintain CVA. The Surfacer System maintains access in the occluded vein, stopping the progression to invasive surgery and downstream health risks associated with poor circulation, using a less risky in-out approach.

‘This funding enables us to pursue CE Mark applications and to take us one step closer to providing better solutions for patients with venous obstruction,’ said Jim Clifton, CEO of Bluegrass Vascular. ‘The Targeted Technology Funds have a strong track record of bringing innovative medical technology to the market. We are pleased that they share our vision for the Surfacer System and look forward to the commercialization of the product in Europe and the United States. ”

About Bluegrass Vascular Technologies: Founded in 2011, Bluegrass Vascular Technologies is a medical technology company dedicated to the development and commercialization of life-saving devices and methods that address deficiencies in vascular access procedures. The initial product offering of the company, the Inside-Out Access Catheter System Surfacer, is a proprietary system that allows physicians to adopt a novel ‘inside-out’ approach to gaining venous access. For more information, please visit