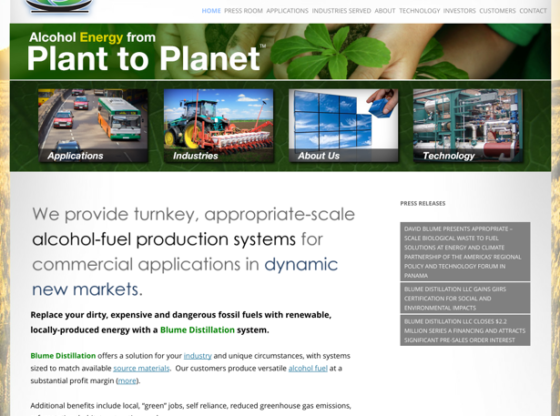 Blume Distillation LLC, the leading supplier of appropriate-scale alcohol fuel (bioethanol) production equipment, today announced the successful completion of its $2 facility. 2 million Series A funding round The round consists of angel and impact investor support The funds are used to accelerate the assembly of Blume Distillation’s bioethanol prototype production system. The company focuses on the development and acquisition of intellectual property in the areas of mechanical and biological systems, processes and co-products. Key engineering and development partners have been added to the company

“The need for locally produced, clean and low-cost fuel for communities around the world is absolutely vital,” said David Blume, Founder and Chief Technical Officer of Blume Distillation LLC. “Our advanced distillation technology will produce renewable alcohol fuel that is 98% free of pollution and, due to its modular design, will allow our customers the flexibility to produce fuel from a wide range of available sugar and carbohydrate-rich fuel feedstocks. “That’s right.

Blume Distillation is engaged in the design and development of appropriate turnkey equipment to produce bio-ethanol from waste and surplus resources, as well as native and cultivated crops. Commercial systems are designed to produce between 20,000 and 500,000 gallons of fuel per year, ideally suited for power applications such as transport, clean indoor cooking, electricity generation and cooling.

The Company has identified hundreds of thousands of potential equipment placements worldwide and received almost 300 pre-sales order registrations. Key potential customers include food processing companies, beverage producers, industrial/nutritional companies, commercial agricultural operations as well as waste pickers and individual business owners. The profit potential of the sale of bio-ethanol, the use of waste stream resources for the production of fuel and the ability to develop high-value co-products support the return of capital equipment in as little as 24 months.

“We are pleased to have reached a significant fiscal milestone, successfully closing our seed stage funding round,” said Ryan Sarnataro, CEO of Blume Distillation LLC. “We have attracted an active community of investors who recognize the potential to have a positive global impact by promoting localized production of renewable bio-ethanol. Our investors see the prospect of a solid return comparable to traditional venture capital offerings. “That’s right.

Over the past three years, the company has achieved a number of significant operational and development milestones and has added IP and proprietary design features that greatly enhance valuation As a result, the company predicts continued growth and completion of prototype systems by Q3, 2013.