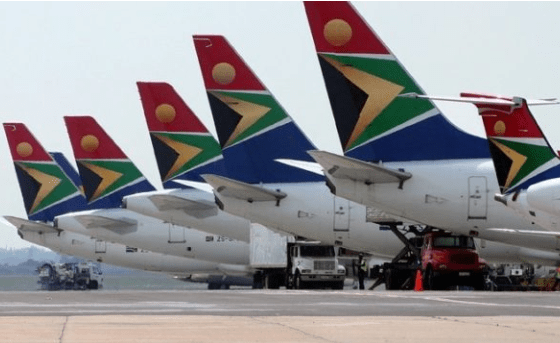 The country’s flag carrier has been under business rescue since the 5th of December 2019. The fate of the airline is uncertain as the worldwide lockdown and the closure of the boarders has halted operations and has compounded its financial distress.

The business rescue practitioners Siviwe Dongwana and Les Matuson since the commencement of their roles have been encouraging workers to accept severance packages which has led to a battle in the courts between the airline and trade unions. As of the 1st of May, SAA workers were placed on an unpaid absence as the airline does not have the funds to pay its workers. Depending on the government’s approval of a proposal to loan more money to its flag carrier, workers are going to experience pay cuts of up to 50% for the highest earning employees in June. These efforts are to mitigate against the imminent threat of liquidation. The practitioners have made it clear that they do not wish to liquidate the airline as this would not only have disastrous impacts on the creditors but would result in the loss of employment for thousands of workers, increasing the already high unemployment rate in South Africa.

A structure wind down is preferred as creditors are likely to get the most from this rescue strategy and would give the airline an opportunity to preserve as many jobs as possible. Interesting to note, the former SAA chair Dudu Myeni was declared a delinquent director in terms of the Companies Act earlier this month following an investigation into his term.

The issues faced by SAA, speak to the levels of corruption and mismanagement of state subsidiaries and the fact that the workers are the greatest sufferers. In the current condition, the loss of a source of income has landed hundreds on the other side of the poverty line. It is unclear when the airline will recover, if ever, leaving thousands of lives hanging in a balance.