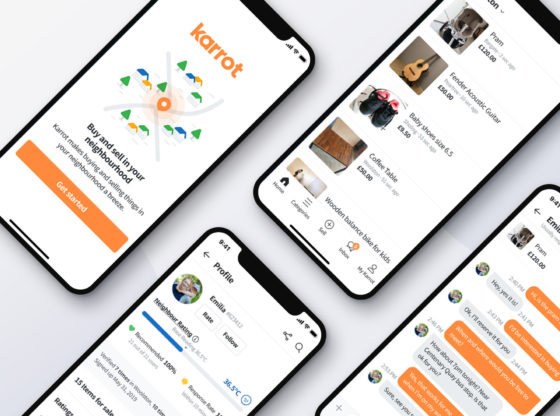 Danggeun Market, the startup behind Karrot, is South Korea’s largest neighborhood marketplace and networking app. It raised US$33 million in Series C funding  on 1st June 2020.

The funding round was led by Goodwater Capital and Altos Ventures. The total funds of the start-up stand at $40.4M. Danggeun Market’s list investors include Kakao Ventures, Strong Ventures, SoftBank Ventures and Capstone Partners. It had launched Karrot in the UK on November 2019. Part of the funding will be used for expanding into international markets and increasing its monetization tools.

Karrot is a peer-to-peer marketplace that shows people listings from sellers located within a 6 km radius (distance slightly wider for remote areas). Most of the transactions are completed in person. User identities are verified through their phone numbers and location. The app aims to make buying and selling easy. Users can upload their old stuff or search for the stuff they want.

Founded in 2015, Danggeun Market’s co-founders are Gary Kim and Paul Kim. They previously worked at KakaoTalk, a messaging app in South Korea. CEO Gary Kim said that their model works because of high population density in many cities of South Korea. Also, overseas, the company will focus on densely populated areas, mainly the areas without a dominant neighbourhood marketplace app.

The startup claims that they have reached around seven million users in April making Karrot the second-largest shopping app in SK, after Coupang- the country’s largest e-commerce platform. Despite the pandemic, the number of listings on their app grew from 4.4 million to 8.4 million from Jan-Apr month, since people spent more time at home and found more things to discard. There was also a jump in the number of postings made, claimed CEO Gary Kim.

Face-to-face transactions didn’t stop because of the pandemic as South Koreans are used to wearing masks. Safety measures were also ramped up during the pandemic. They have also introduced a new feature called Karrot Help. It helps to match people with neighbours who need help running errands. The startup has also developed tools to automatically control the price of mask listings to prevent profiteering.