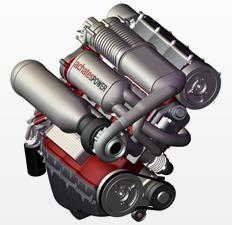 Achates Power, Inc., developer of radically improved internal combustion engines that increase fuel efficiency, reduce greenhouse gas emissions and are lower cost-today announced growing market traction for its opposed-piston technology with the addition of $35.2 million in Series C financing, the appointment of top automotive and commercial vehicle executives to its Industry Advisory Board, and its selection as a semi-finalist in the Securing America’s Future Energy (SAFE) Energy Security Prize.

All existing Achates Power investors participated in the fundraising round, including Sequoia Capital Partners, RockPort Capital Partners, Madrone Capital Partners, InterWest Partners and Triangle Peak Partners. The Series C financing follows a $19 million Series B round in 2009 and brings the total raised by Achates Power to nearly $90 million since its 2004 founding. Between the two funding rounds, Achates Power has also tripled its U.S. patent portfolio and increased the number of issued and pending claims to more than 1,500 unique innovations.

‘The confidence that our investors have in our technology, and the eagerness of these well-respected industry leaders to join our Industry Advisory Board, further validates the work we’re doing and moves us even closer to production of the Achates Power opposed-piston, two-stroke engine,’ said David Johnson, CEO, Achates Power.

The Series C funding and Industry Advisory Board formation will help accelerate Achates Power’s product development and commercialization efforts. It will also provide additional support for the company’s customers, including its contract with AVL to develop the Next-Generation Combat Engine for the U.S. Army Tank Automotive Research, Development and Engineering Center (TARDEC).

‘The Achates Power engine provides a very compelling value proposition for light-, medium- and heavy-duty powertrains manufactured in Europe, the U.S. and other regions,’ said Dr. Karl Viktor Schaller. ‘For this reason, I am eager to collaborate with Achates Power as it moves from development to production of its opposed-piston engine.’

Achates Power also announced that it was selected as a semi-finalist for the SAFE Energy Security Prize. The Award recognizes U.S. organizations that are developing technologies to significantly reduce America’s long-term oil dependence. Public voting continues on the SAFE website, http://oilembargo40.org/#vote, through Oct. 11 with the top three companies advancing to the finals. The winner will be selected at the OPEC Oil Embargo+40 Summit on Oct. 16.